Today, I am sharing a book series review, as relayed to me by Charlotte, my 10 year old daughter.  The Calabiyau Chronicles is a series of books which opened the excitement of reading to my daughter.  When she was in the 4th grade, during her birthday month, she was invited to select a free book from a huge collection of brand new books that had been delivered to a classroom.  The way she described it, the selection of books was so enormous!

My daughter searched through the piles of books, and emerged with her choice, KANDIDE AND THE SECRET OF THE MISTS.  The cover and the title are what attracted Charlotte to the book.  From my perspective, the book was glorious.  A fantastic cover, intricate artwork within, and written at a level which I was thrilled that my 10 year old daughter had chosen.  The book is fantasy, and features beautiful fairy-like creatures, winged and colorful.
According to Charlotte, SECRET OF THE MISTS was action-packed and exciting.  The most exciting part was when Kandide, the main character and heroine, arrived at the mists, and was attacked by the Garglan, a vicious, hairy creature with wings, sharp teeth, claws, and a long tail.  The Garglan also has creepy red eyes.  Kandide needed the help of wolves to escape it.

Her excitement about SECRET OF THE MISTS prompted me to purchase book 2 of the series, THE LADY’S REVENGE.  According to my daughter, THE LADY’S REVENGE is mysterious.  A princess, Tara, is captured, and frozen in a block of ice.  If the ice melts, she will die.  Kandide is in charge of making Winter, and so she changes the season to Winter again, keeping the ice frozen.  Kandide enlists the help of her brother to magically save Tara from the block of ice.

At the end of Book 2, Charlotte was so anxious for book 3…but it wasn’t released yet!  I had to pre-order it, and she was so thrilled when it finally arrived!  The title of Book 3 in this series, is THE MASKS OF DECEPTION.  This book, like the two other before it, features beautiful pictures throughout.  They are stunning.

Charlotte just finished reading it, and here is what she told me:  There is a war going on between Calabiyau, and the Banshee Kingdom.  She didn’t want to give me too many spoilers, but she did mention at one point, that the Fee’ have to enter the human world, and they get stuck.  This is dangerous for the Fee’ because in the human world, time moves faster and they age really quickly.  MASKS OF DECEPTION ends with “To be continued…”, which delighted my daughter.  We are hoping for a book 4!
It should be noted that there is a beautiful, intricate coloring book that coincides with this book series.  We also own the coloring book.  It’s truly lovely.

As a parent, author, and teacher, I was so happy to find a series of books which my daughter became so enthralled with.  I would also like to point out that when I reached out to author Diana S. Zimmerman about Charlotte’s zest for her books, she was more than happy to connect.  That means a lot to the readers who fall in love with characters and places of an authors creation.  Thank you for writing such a series for my daughter and other readers to enjoy.

Diana S. Zimmerman has a website for all things Kandide:  www.kandide.com
The Calabiyau Chronicles Series can be purchased on Diana S. Zimmerman’s website, or on Amazon
She can be found on social media as well:
Twitter:  @DianaZimmerman
Facebook:  Diana Zimmerman

Be the Star You Are

Kandide selected to be at the Bologna Book Fair

I'm so excited. Kandide goes International!!!
The Bologna Children's Book Fair in Italy--one of the largest children's industry book fairs in the world--has selected Kandide to be at the entrance to the show. Here is a copy of the giant banner. What an extreme honor.
Thank you everyone for helping me become a best selling author. 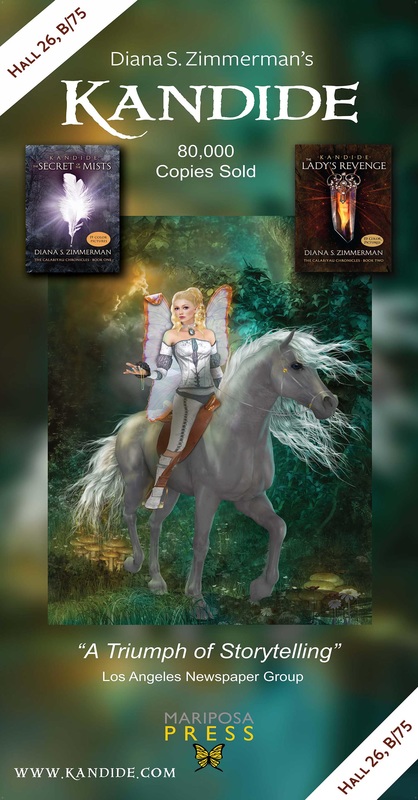 Check Out This Opening... 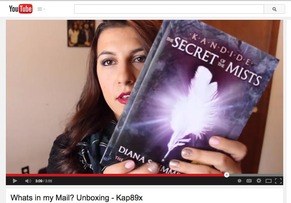 Kristin ﻿(Kap89x) ﻿is a YouTube star, and one of its most awesome book bloggers. Her fans can't get enough of her reviews. She's witty, charming, and so much fun to watch.

If you want to stay up with the latest books, you have to subscribe to her channel.

Checkout her opening the package with the Kandide books.

The Los Angeles Drama Club Teams Up With Diana Zimmerman 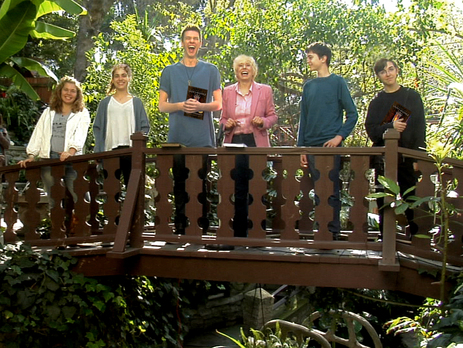 The Los Angeles Drama Club has teamed up with Diana Zimmerman to read selected chapters from "The hottest new fantasy adventure series, Kandide: The Secret of the Mists."

Diana's special guest is none other than teen pop star of magic, Collins Key, who will kick off the campaign on his own YouTube channel.

Taped at historic Brookledge, the home of Magic Castle co-founder, Irene Larsen, eleven of LA's most talented teens and tweens bring Kandide to life with their enchanting readings. The chapters will be posted on Diana's YouTube channel each week beginning Saturday, February 21st.

Diana Speaks To Over 1,200 Kids in Four Las Vegas Schools

Lovely comments from the schools. Here's one of them, as well as a picture of some of the kids.

Thank you so much for sending Diana to us!!!!!! She is an amazing woman and was marvelous with the kids. She had them eating out of her hands. This opportunity was so great, and my kids really enjoyed it. Due to the way we had to schedule, using both English and Reading class to maximize the amount of students who go to hear her speak, some of the students heard her presentation twice and were just as awed and interested the second time as the first!  I will always be interested in having her back!

Not a country, not a culture, nor a time has existed without its fairy lore. Called by many names, fée, fey, fata, toverfee, faery, or simply fairy, their existence to this day remains controversial. The late musician/composer, John Lennon once said, “I believe in everything until it’s disproved. So I believe in fairies, myths, and dragons. It all exists, even if it’s in your mind. Reality leaves a lot to the imagination.”
Copyright 2020 - All Rights Reserved
Noesis Publishing - Los Angeles, CA